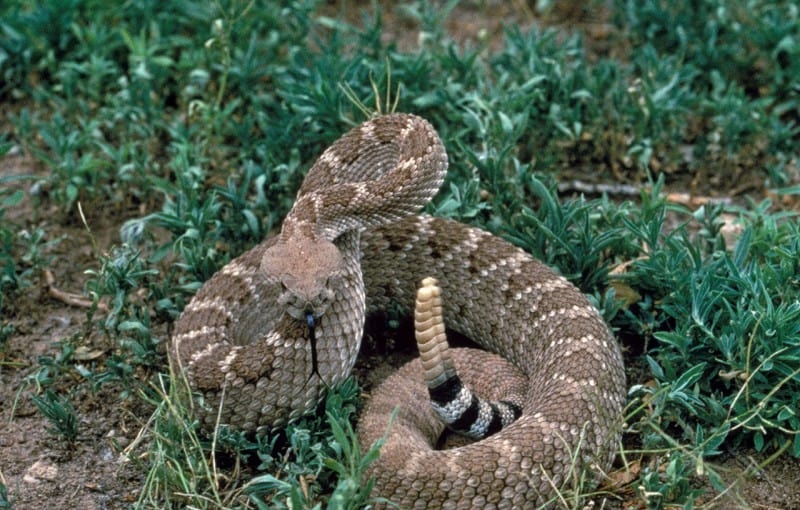 There are four main species of venomous snakes that can be found throughout the United States, and while they might be an important part of local ecosystems, that doesn’t make them any less dangerous towards an unsuspecting person. While most snakes would rather just be left alone and are rarely aggressive, it’s still best to know what type of venomous snakes (remember it’s venomous – they’re not poisonous snakes – you don’t die from eating them!) you might run into whether hiking or hunting, in the woods, mountains, or desert.

The number of venomous snakes varies greatly from one region to another, and it is also important to understand that the severity of a bite can also vary greatly. While a full grown healthy adult is almost certainly going to survive a bite from a copperhead, a Mojave rattlesnake is up there with among the worst possible native snakes in the U.S. to get bit by. Understanding the general families of venomous snakes in the United States will allow you to prepare properly and keep your eyes open.

So read on to learn about the critters that may make you really wish for one of these bite kits. They might be a part of every natural environment in the United States (minus Alaska and Hawaii) but you don’t want to run into them in the wild! 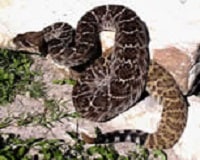 Rattlesnakes are not only the most distinctive and well known of the venomous snakes that can be found throughout the United States, but they are probably by far and away the most common, as well. There are many states that only have rattlesnakes when it comes to venomous vipers. In fact, they are the only venomous snake that is found in every single one of the Lower 48 states and the many sub-species are highly adaptable, which helps explain why you can find them everywhere.

Rattlesnakes are by far and away the largest of the venomous snakes that are found in the United States and they can strike up to one-third of their body length. They’re obviously known by the distinctive rattle they have, which they shake furiously depending on how angry or agitated they are at another animal’s presence.

There are literally scores and scores of rattlesnake species, but a few of the most general sub-species include:

Each of these sub-species have different colors and patterns, but all of them have the common triangular head of a pit viper and those distinctive rattles that give the snake their name. While most prefer to be non-aggressive there are a few like the Diamondback or Mojave that have a bit of a reputation for being too curious or aggressive and they are, not surprisingly, the same species that are also credited with causing the most snake bite fatalities among humans in the United States. 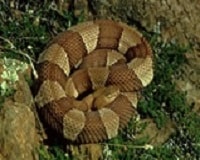 Copperheads area highly venomous pit viper commonly found mostly throughout the eastern part of the United States, as well as some areas central and south of the Midwest. You usually don’t find them west of eastern Texas, Oklahoma, and Kansas, and the further west you go, the further south their range is.

There are five subspecies of copperheads, though the broad-banded copperhead (pictured to the left) is by far and away the most well known.

These snakes are particularly known for having a low level of venom in their bites and a fully healthy adult rarely dies from a copperhead bite although it is still important to seek medical attention as there can still be serious complications. If you find yourself bitten by a copperhead in the wild, don’t assume it is a weak or dry bite.

The right snake bite treatment kit for a copperhead snake bite is the one that is on hand and professionally put together to minimize damage and keep you alive until you can reach a clinic or hospital. While their venom isn’t as dangerous as a rattlesnake, coral snake, or cottonmouth, these snakes bite more humans than any other so be prepared and keep a solid eye on them! 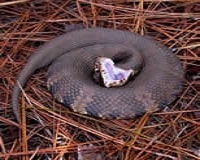 The water moccasin, also much more commonly referred to as a cottonmouth due to its start white colored mouth (in contrast to its very dark tan, brown, or black body). These snakes have a reputation for being very aggressive (at least by standards of snakes) and there are a couple major reasons for this. One is the fact that many non-venomous water snakes are very aggressive so their attacking people gets connected with the strikes that cottonmouths give.

Even beyond that, cottonmouths are the only viper in North America who are known for consistently standing their ground against attack or larger potential predators. This makes them much more aggressive than most rattlesnakes or copperheads. These snakes can be several feet in length and definitely need to be watched out for in the south, particularly around rivers, creeks, lakes, and swamp or marsh areas.

These venomous Southern snakes are often a worry of autumn turkey hunters. At 50-55 inches long on average as an adult, the tenacity of these snakes to “stand their ground” is part of what makes them so frightening. 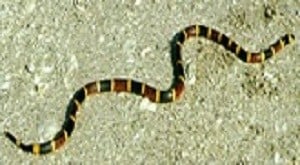 Coral snakes have a distinctive pattern that even has a nursery rhyme built around it in order to help individuals tell these cousins of the cobra (somehow they are, according to science) apart from the harmless but very similar looking king snake. The key is to look at the yellow bands. “Red touch yellow, kill a fellow. Red touch black, friend of Jack.”

Coral snakes are only found in the southern United States, and different species are in North Carolina marshes compared to the deep south, compared to Arizona. These snakes are often referred to as poisonous even though they are technically venomous. The confusion might come because coral snakes are the only venomous snakes in the United States that are not pit vipers – they don’t have the two large curved fangs to inject venom. They do have upper mouth fangs – but they are distinctly different from snakes like rattlesnakes, copperheads, and water moccasins.

The venom is also very different from other snakes, as a coral snake has neurotoxic venom. This means the venom, instead of attacking the surrounding tissue attacks the nervous system, making it particularly dangerous as paralysis and even death can follow. Yet another reason for solid on the site treatment before heading into a medical facility.

Why you need to protect yourself

While even the most venomous snakes are generally shy or non-confrontational, that doesn’t change the fact that you want to take the simple steps you can in order to protect yourself from potential bites any time you’re hitting the wild during your travels. There’s no question that in this case it is much better to have protection and not need it than to need protection and not have it.

If you’re ready to give yourself (or your outdoor loving loved ones) the protection they need, then check out our online store page courtesy of Amazon.com to provide top notch service and safe payment and delivery. We can show you all the best options when it comes to snake protection, and if you still want them for treatments of insect bites, snake bite kits.

Also, finally, thanks to the Center for Disease Control (CDC) for public domain use of pictures of venomous snakes.

We're Outdoorsmen who aren't the biggest fans of snakes, as important as they are, and we want the truth out there about products that claim to protect from snake bites. What started off hoping for another form of protection has become a site pulling together all the information you need to make an intelligent and informed decision.

This site is a participant in the Amazon Services LLC Associates program, an affiliate advertising program from Amazon.com dedicated to providing affiliates with a means for making a commission based on sales. We refer traffic to Amazon for a percentage of any sales made, all sales are handled by Amazon.com and companies/individuals using the Amazon.com system.